The Midwest is generally called “the flyover states” because they are flat, featureless, and mostly filled with corn. And while there is a lot of corn, there is quite a bit more. Both of my parents are from Iowa too, which gives me some excuses to stop and look around. But first we had to run across Montana and visit the Black Hills of South Dakota.

The mountains and forests of Yellowstone gave way to the open plains and farmlands as we went east on old US-87. We went through the Crow Reservation, where even the casino was boarded up and derelict, picking up Hwy 212 and stopping at the Battle of the Little Big Horn memorial. The place ended up being far more spectacular than we expected. The battle itself was fought over a day-and-a-half, and while Col. Custer and all the men under his direct command we killed, most of the battalions did survive. 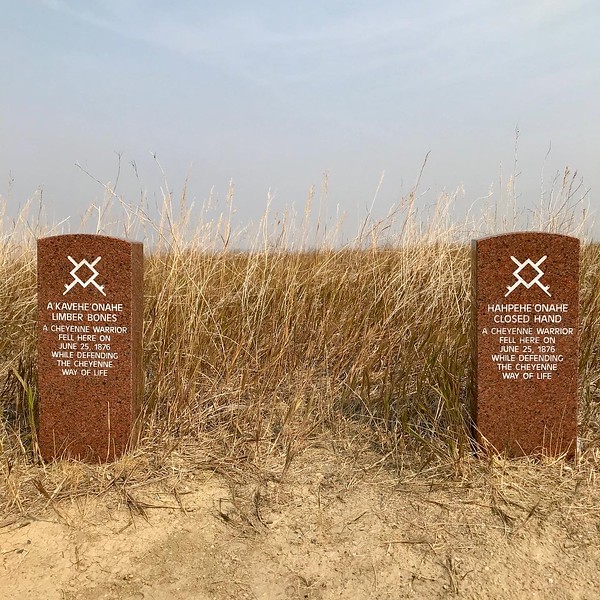 Soldiers were buried where they fell, and though they were moved to the adjacent cemetery later, markers still stand at the original locations. That has the effect of showing you the devastation that happened when 1,500-2,000 warriors took on the 300 or so of two battalions of the US 7th Cavalry. Last Stand Hill has a memorial to the horses killed, because in desperation the final band of soldiers shot their horses in an attempt to make a defensive wall.

The cemetery is also a history lesson, with veterans buried from the Indian Wars as well as every conflict up until Vietnam. Navajo code talkers, Congressional Medal of Honor awardees, and even pioneers and their infant children who were moved from forts that closed down to the more central location above the Little Big Horn.

After taking this in for a few hours we rode on to a campground near Ashland, where we had a wonderful sunset in the pines and built a fire with scrap wood someone had left at the spot.

We continued on Hwy 212 before turning south and into the corner of Wyoming so we could see Devil’s Tower. We chose to save time by not going into the monument itself and spending time at the souvenir shop. I grabbed another pressed penny for my collection and had someone want to take our picture with the sidecar in the parking lot.

We took 14-south and picked up the interstate for a rare moment on the super-slab. I-90 had an 80mph speed limit but that would have been asking too much of ‘Ol Dusty, so we kept it around 70. Just past Spearfish, SD we grabbed 85-South and stopped at Deadwood for an overpriced dinner and then made our way to Rapid City to stay with a friend.

Sara Liberte is a fantastic photographer who I work with every year on the Veteran’s Charity Ride to Sturgis, piloting a sidecar that she uses as a platform for getting moving shots of the participants. She was in the middle of training a new puppy, so we didn’t get to spend too much time hanging out, but Kate and I still did plenty of exploring.

We did the obligatory loop to see Mt. Rushmore, the Crazy Horse Monument, and instead of Custer State Park (we’ve already seen a lot of bison, thanks much) we went to the town of Custer and visited an abandoned amusement park. It used to be themed around the Flintstones, and there are a few old slides painted to look like brontosaurus’, fake palm trees, and a little show room with a stage where an anamatronic Fred Flintstone used to play guitar. It was surrealistic to say the least, and a highlight of the trip for me.

The next day we got in some hiking and saw Buzzard’s Roost (there actually were a lot of buzzards circling so I guess the name is appropriate), then stopped at a rock shop to see some dinosaur bones, rare gems, and the most massive crystals I think I’ve ever seen. We poked around through downtown Rapid City, saw Art Alley, and then spent time handling chores like laundry, school applications, turning in articles, and the like.

Iowa was next on the list and it certainly starts out like you expect it. But first we got to see the Badlands of South Dakota, hit our first COVID-19 checkpoint at the Pine Ridge Reservation, and continued on until we crossed the Missouri River. We stayed the night right on the banks, at the Snake Creek Campground, and were into the cornfields the next day.

Unbelievably straight roads were the order of the day and things got monotonous, but keeping to the back roads meant there were small towns to ride through, breaking things up better than just passing the same gas stations and chain restaurants on the interstate. We ended the day in my mom’s hometown, Spencer, IA, which turned out to be a beautiful city. It’s small but practically the entire town looks ready for a calendar shoot, with historic homes, an old-timey downtown, and a city campground on the Little Sioux River. 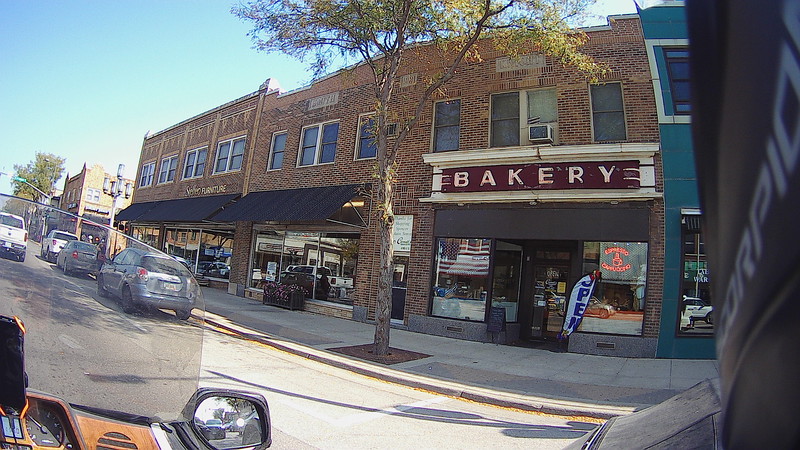 I’ll have to leave Spencer for our next installment though, since we spent two days there and continued on towards State Center, IA, where my father is from. There are more photos than stories to share, so I’ll leave you with some of those.