While roads like Route 66 or The Dragon get most of the attention in pop culture, the Blue Ridge Parkway is a gem that hides in plain sight. Unlike other famous roads, the Parkway was specifically designed to be a scenic road. The curves have a constant radius, there are very few places to turn off, and there are no roadside distractions or blazing neon signs fighting for your attention.

Built during the Great Depression by as many private contractors and public agencies as money would allow (and a bit more), the road didn’t get completed until the 1960’s, with the final 7-mile stretch not being completed until 1987. It doesn’t allow commercial traffic and landowners adjacent to the road aren’t allowed to develop their properties for purposes other than agriculture.

What that means is the route is a holdout against time, where you still plod along at 45mph or so and take in the sights. There’s camping and hiking and the like, but there are only a few rare service stations along the Parkway. You need to exit and head into one of the nearby towns if you want to resupply or refuel.

What does this have to do with our trip? Well, of course we took the Parkway down as we began our southern leg. Our eastward leg ended in Plainfield, New Jersey, where we spent several days so Kate and I could spend time with Scirocco, her childhood (and beyond) friend. Fortunately Plainfield is far enough away from the manic noise and traffic of New York City that things are relatively peaceful. 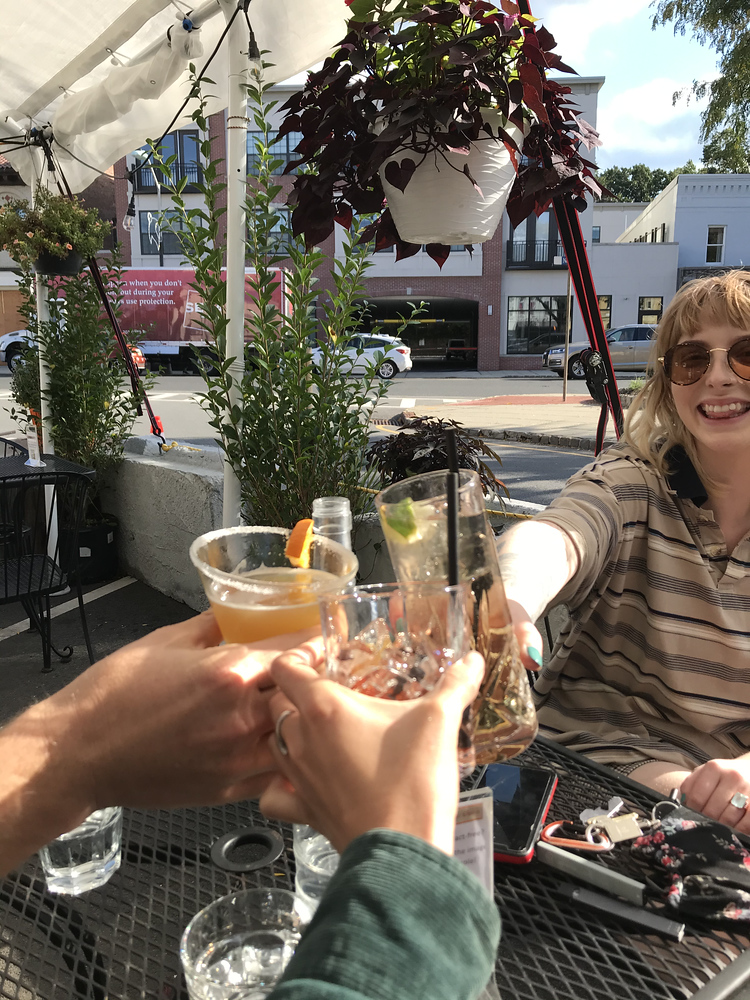 We got to roam around downtown, grab sushi for the first time since our trip started, and do a little exploring. Well, Kate and Scirocco did. For the most part I sat glued to my laptop trying to get work done, or disassembling my cell phone in an attempt to fix it.

In between all that adventure we took in a stray dog, who promptly peed on everything he could find. We had the building supervisor put out an email, and within about 36 hours his owners popped up. We were getting close to taking him on the road with us, and I was surprised to see Kate being more attached than I was (she isn’t really into dogs).

After a few days in New Jersey we hit the road for points south, starting with a stop in Philadelphia to see the grave of Kate’s grandmother, Jane Kriebel. The illusive woman was under a misspelled version in the directory, making it seem impossible for us to find her plot. Dutiful staff at the Arlington Cemetery managed to find it though, but the plot itself had no marker. It gave a sense of mystery to her, and it gave even more reason to pause and reflect on who she was and what her life was like.

Onward we went after saying our goodbye’s to Scirocco, with our destination being York, PA. We stayed with someone we found online, Barry. He and his wife turned out to be Deadheads of sorts, festival-goers who had tons of stories to tell of concerts and festivals, van and motorcycle road trips, and life in rural Pennsylvania. It was a welcoming place to spend the night, but we were back on the road in the morning to continue our southern route. 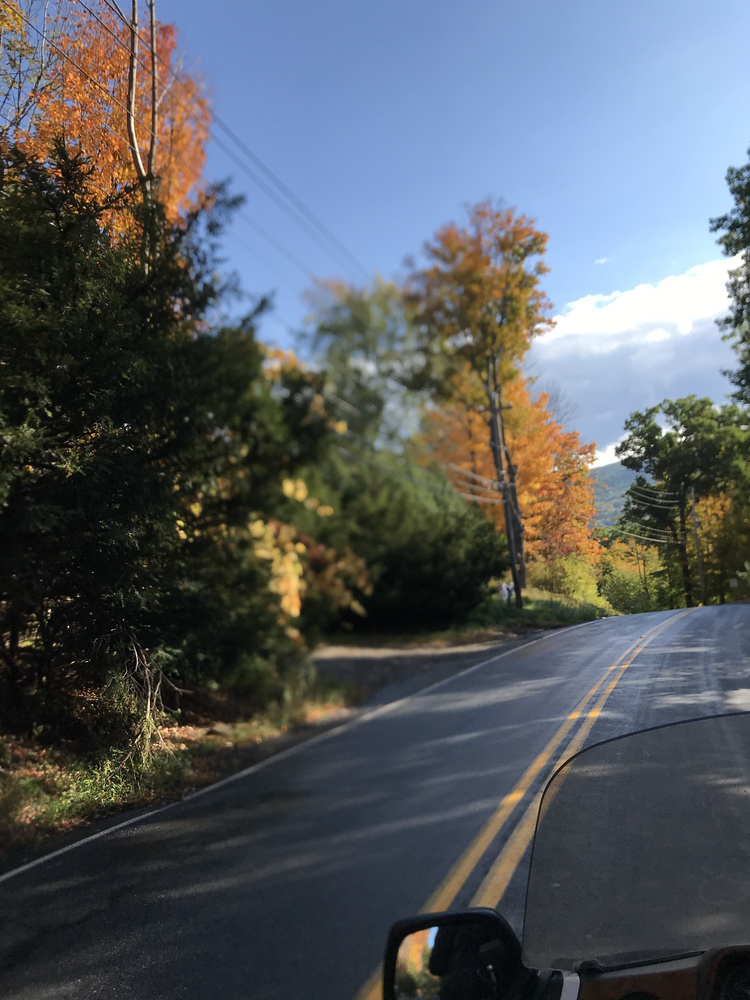 We nearly forgot about Gettysburg, which is more than just an old battlefield. The entire area is dotted with memorial statues, plaques, and monuments to the many units and some of the notable individuals of the battle. The area is so large there is an auto route leading around the area, from field to field, past old cannons and stone walls.

The town itself is historic too of course, doing a great job of catering to tourists without feeling like a tourist trap. I mean, if you’re going to make money of a battle that literally turned the rivers red with blood for days, you need to do it with class.

Crossing the Mason-Dixon line into Virginia, we stopped at another slice of history, though this one much less somber: Cooter’s. You may remember the mechanic-friend of Bo and Luke Duke if you were one of the tens-of-millions of people tuning in to the Dukes of Hazard TV show. Well, ol’ Cooter has three locations full of memorabilia, replica cars, and even a few originals.

At the Luray, Virginia location the real gem was one of the Hazard County Sheriff’s cars used in an actual scene… it was wrecked of course. After looking around at the displays I swallowed my pride and paid too much money for a hat and a postcard, then we skee-daddled on south to stay with another friend from the internet, Fred andChristie. 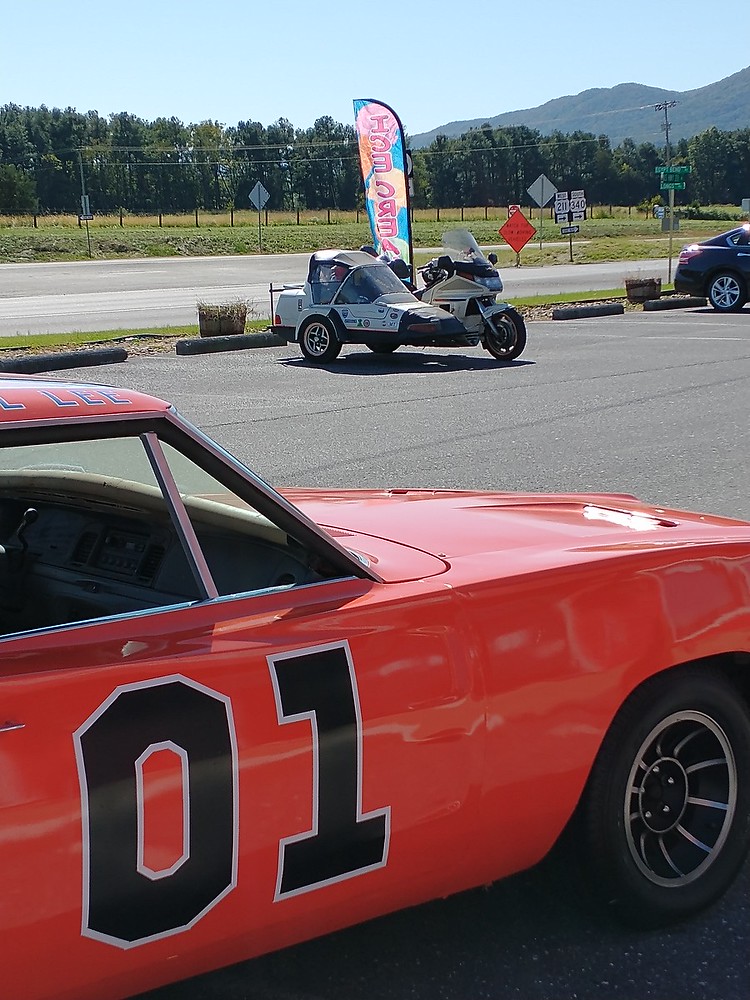 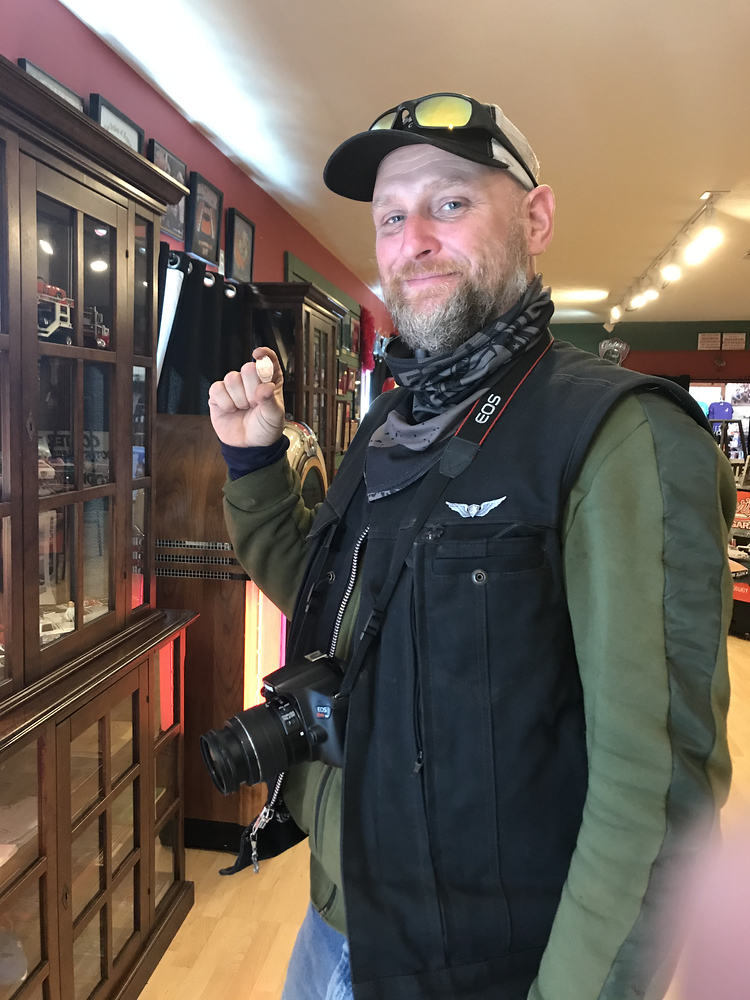 Another pressed penny for the collection.

Their place turned out to be a dairy farm, and we made our home upstairs in an office that smelled like cheese was being made, because it was of course.  the cows made themselves known and Kate and I were treated to really weird dreams for unknown reasons. I could blame it on the jalapeno peppers on the pizza (made with cheese from the farm), except Kate didn’t have any.

On the plus side Fred and Christie were really great hosts and we traded a lot of cool stories about travel and life in general before setting out the next day for Walton Mountain. Yep, another museum based on a TV show, but my mother’s favorite and honestly from what I remember it was a pretty good show when I watched it with her.

Kate had never even heard of it but she dutifully killed time while I looked at replicas of John-boy’s room, the Walton’s kitchen, and bought postcards in Ike Godsey’s store, aka the gift shop. 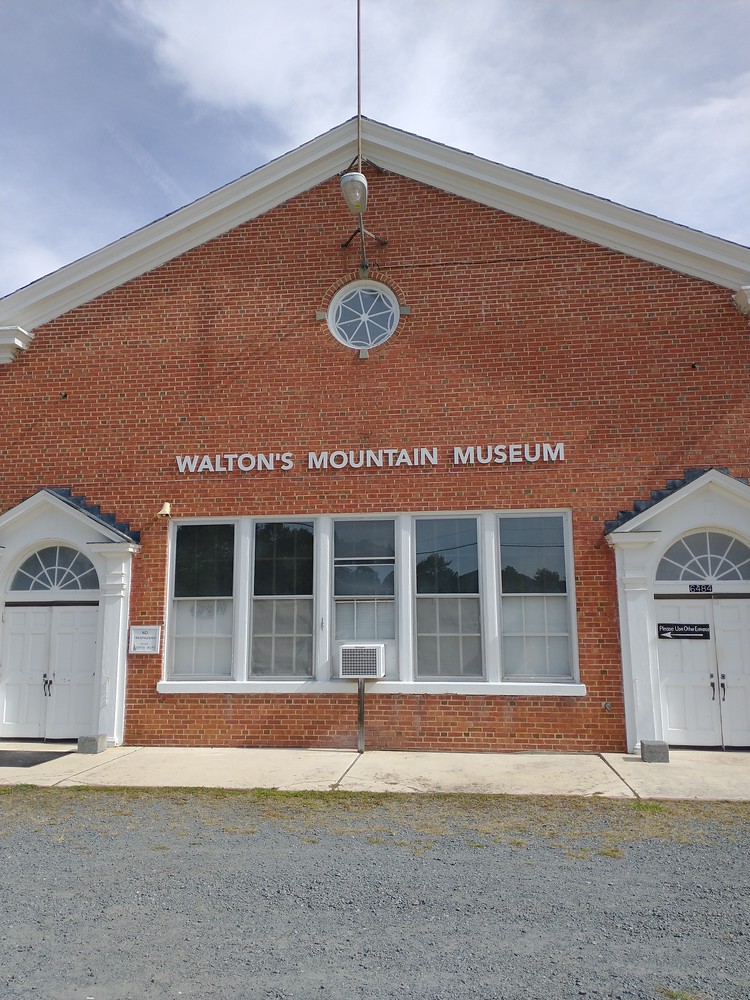 The museum is in the town’s old schoolhouse.

A model of the Walton’s house, among other pieces of work done by fans of the show.

With Kate being a trooper while I looked at a museum for a TV show sh’ed never heard of, we needed to stop off at Crab Tree Falls, but it was brief. We had a lot of miles until the North Carolina border, and the Blue Ridge Parkway was not designed for making good time: it’s for having a good time. 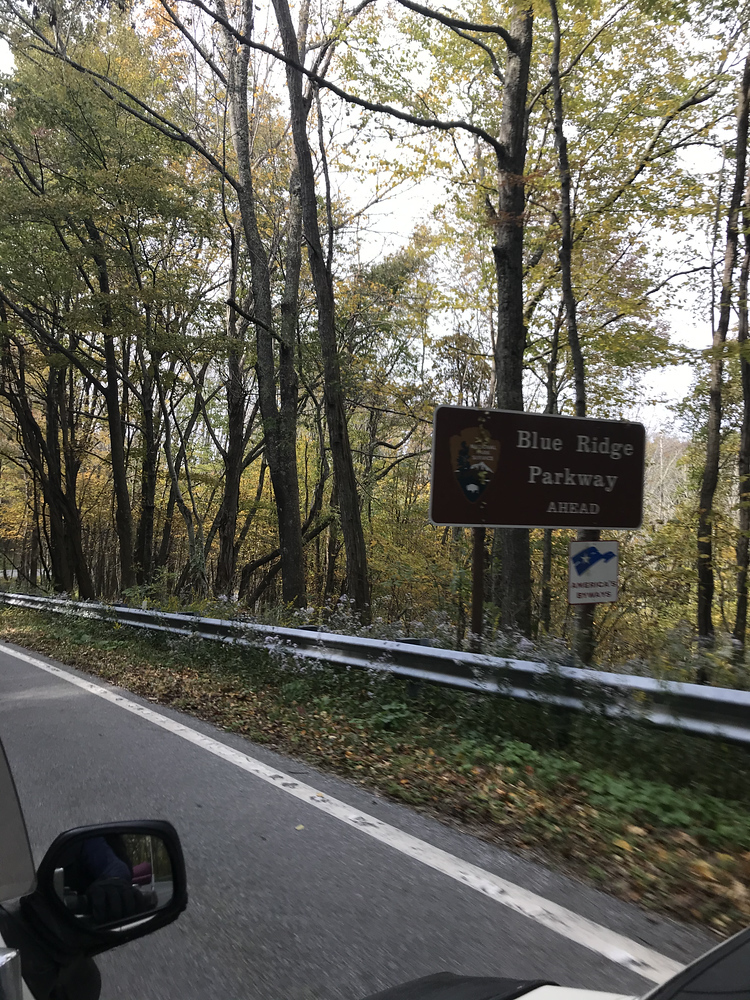 I’ve been on the Parkway at least three times previous to this ride, and I think this stretch was the first time I wasn’t riding in the rain. The leaves were changing too, and although it’s not as dramatic as Vermont of New York, it is stunning just the same (especially to a Californian used to pine trees and coastal oak).

For our first night in North Carolina we camped out at a dilapidated campground right off the Parkway. We got there after sunset, and I ended up parking in a really weird spot that almost got ‘Ol Dusty stuck when rains came in overnight and turned the ground soggy. Black chestnuts fell all night as well, making a loud rustling and “thud!” when they landed. Once again Kate and I were plagued by strange dreams and woke up several times in the night.

In the morning we actually managed to find a functioning microwave and some styrofoam cups to make tea and instant coffee in, so the campground wasn’t all bad (though you did need to run the water for 10 seconds before the rust color would fade out and the water would run clear). 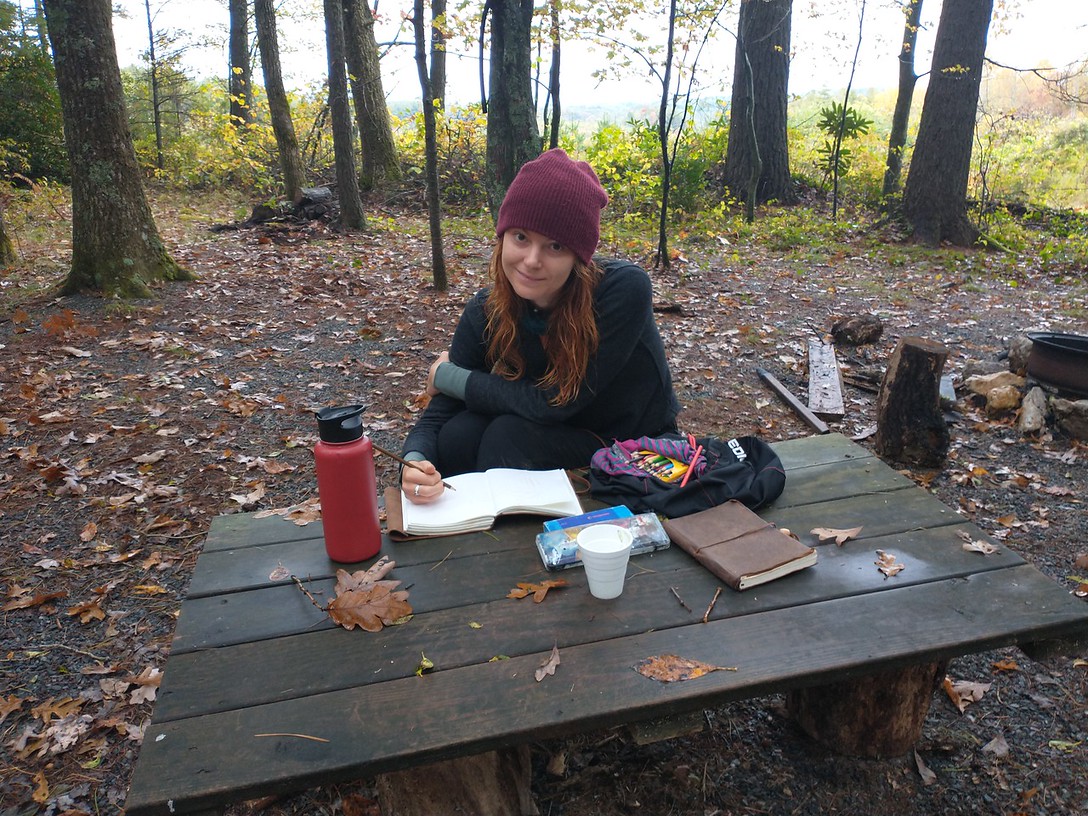 The campsite even came with a “bench.” But hey, free firewood and working power outlets?!! Bargain.

Back on the road we went only 30-ish miles to the intersection of Hwy 18 and the Parkway. We were supposed to meet a friend of mine there, but it started raining right as we pulled in and continued almost non-stop for the next 15 hours.

Our plan to ride down to Asheville seemed scrubbed as we looked at the weather radar. Hurricane Delta had turned into the Gulf of Mexico and shouldn’t have pestered North Carolina at all, but it was sending storms up as far as New York. When my friend Benson finally arrived we had already gotten pretty comfy at one of the only places you could, Wild Woody’s Campground.

This place turned out to be a real gem, with Carl being the host, bartender, story-teller, and knower of where the Keurig cups are located. Kate, Benson, and I ended up staying all day, checking out antiques, oddities, old campers, and grabbing a late lunch at Freeborne’s, a bar & grill next door.

The bulk of the old camp trailers out back are for rent, running from $45-$60/night. We found a small one called “The Little Zipper” and it had a space heater and a bed, which was good enough for us. The locals partied well into the night, and with beer only being $2.50 I spent a bit of time with them, even getting to sample some local moonshine.

Benson finally took off around 8:30pm, trying to time his ride home between two bands of rain (it didn’t work). I have known him since 2001, but only online: this was the first time we had met in person. Knowing a person virtually for that long though, it’s not hard to pick up a conversation as though you were old buddies.

Blurry selfies really take ya back to the “ancient” days of the internet, when flip-phones roamed the earth.

We spent the morning trying to time our escape between bands of rain. We almost nailed it but it was taking us too long to get suited up. I shut the bike off and we spent some time chatting with Carl as he opened up the antique shop, then we beat it for the Parkway.

The ride was wet even though we only hit spotty rain. When it wasn’t raining though it was foggy, but despite the changing altitude of the mountains things didn’t get too cold…for me. Kate eventually was soaked through and had to completely change her clothes, switching from her warm and water-resistant snowmobile suit to her waterPROOF rainsuit.

Despite for blocking the most spectacular views, we did get a few of those panoramas where the clouds are dancing in the valley below you, rain is falling from clouds above you, and sun is shining miles down the valley in the far reaches.

We made it down to Asheville and stayed with another internet friend, Angie. She’s a nurse though and her hours meant she wouldn’t be home in the morning so we set up camp on the back porch, and I watched some motorcycle races on my laptop while running ‘Ol Dusty so I could charge the laptop’s battery.

In the morning we’ll be out of Asheville, bypassing South Carolina completely in favor of Georgia. I’ve got a lot to share about our stay in Asheville, but it will need to wait until the next installment. I can hint a little though and tell you Kate loves the River Arts District, their BBQ, and the folk history. Oh, and we saw otters (though I thought the bears and the wolves were way more rare, but hey, otters…)

Stay tuned and make sure to get your photo-fix by looking at the week 7-8 gallery here. Photos are in chronological order starting with the oldest.

See you on the trail, 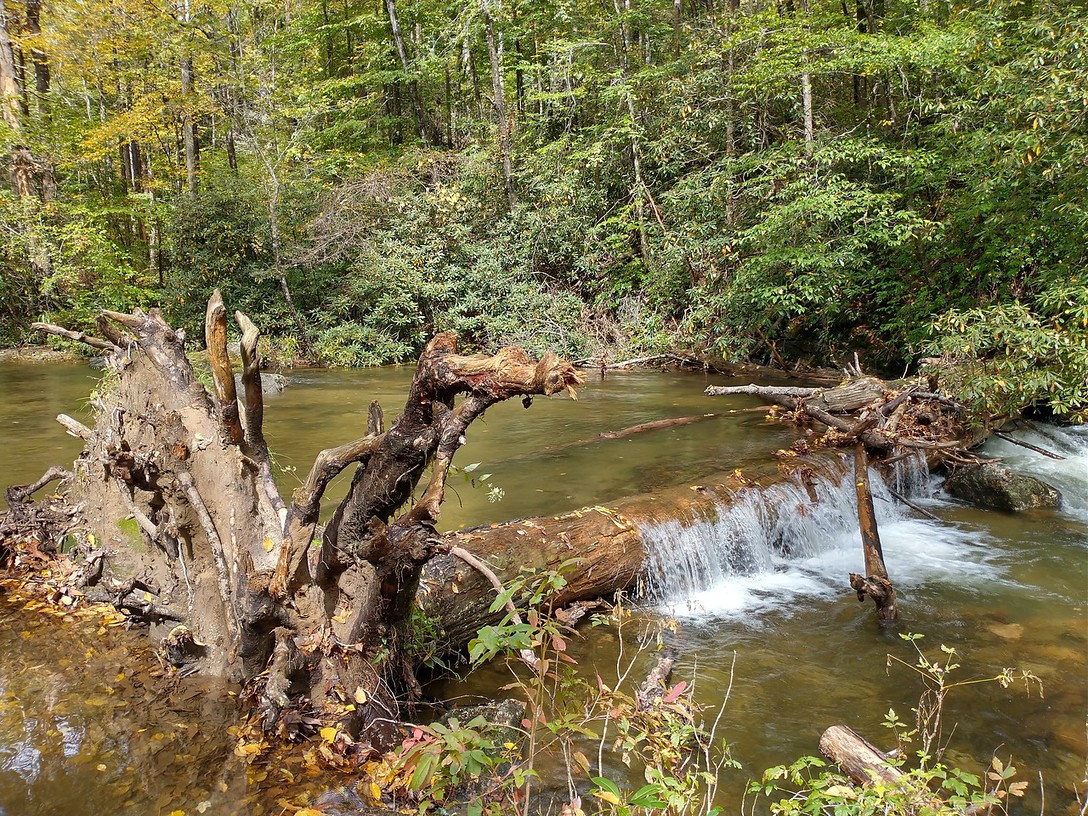 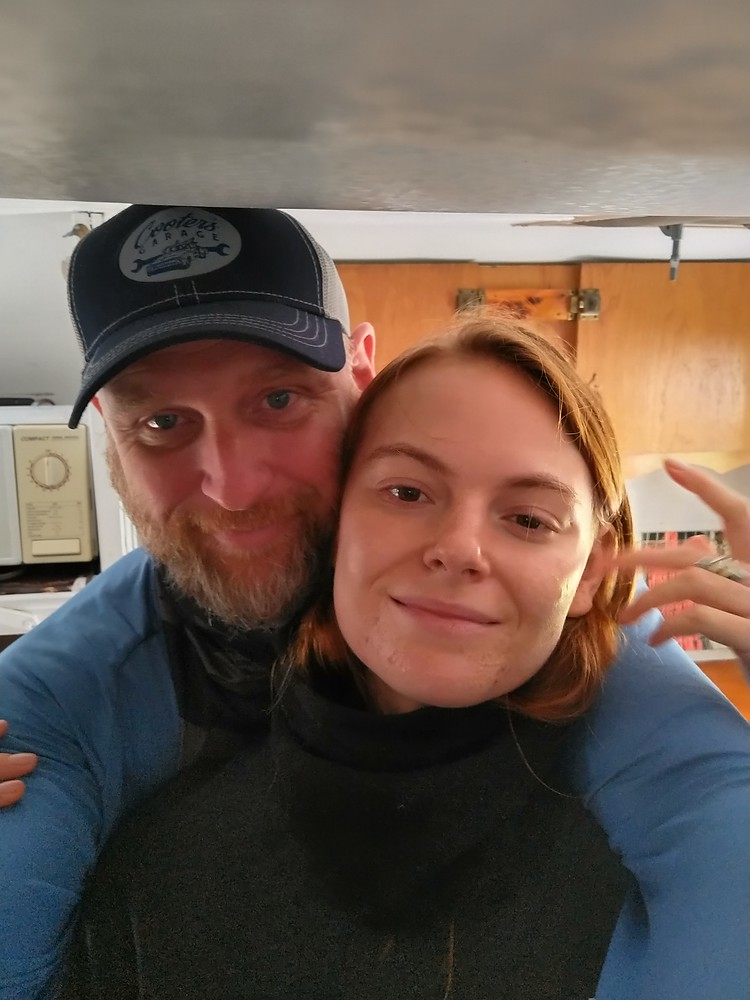 One thought on “Country Roads…”